here on this website, I'll be showing off my merchandise collection for Mario and Sonic

But first a little background of who I am.

I'm very new to plush collecting scene staring in July 2019 but I hope to collect for many years to come!

before I start I should mention that none of these are for sale unless I state otherwise on my twitter, In this page I'll only be showing my Plushes, so my figures and others will be coming soon on a different page and also this is in Chronological order so this website will be updated alot since I'm still collecting. anyway let's begin

Here's my first Mario plush! this (and the next five) plush was made by the company PMS International: Their Website and got them at a amusement park in 2011. the plush is a very nice Mario plush but isn't really well known (along with the next five) since they were released only in the U.K at Arcades and Amusement Parks from 2009-2012. but overall this plush is well made and should have more attention.

Here's a PMS Luigi, he's pretty much the same as my Mario except that his overalls are too short for the plush. but other than that I have nothing else to say.

Here's a PMS Toad which think is a pretty good plush! His arms are very thin and his mouth is embroidered a bit weirdly and is a bit hard to see but other than that it's good.

Next is the PMS Yoshi. one unique thing about it is that it's a yoshi plush in a standing up position (although can't stand by itself) which most plushes don't do, the majority of them are made sitting: 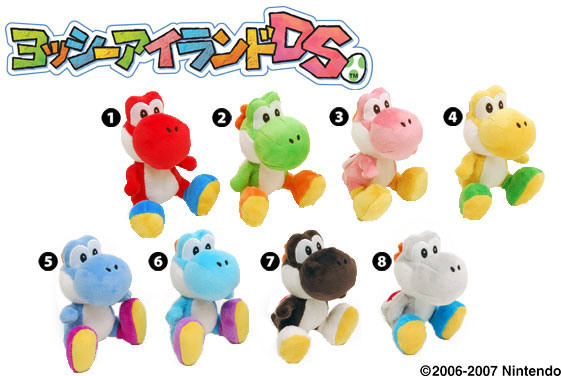 the plushes eyes are pretty simliar to Sanei's Mario Party 5 one to it even being embroidered (like other PMS plushes). The plush is very cool though!

Here's one of my favourites. My PMS Sonic plush although it was made in 2011, It was designed before Sonic Generations so it looks like Classic Sonic before his color changed in Generations which is very cool! Unfortunately it's very obscure since it's not really talked about on the internet. If you can buy this plush along with the rest of the set they're amazing plushes!

Here's my Goldie Koopa plush. I forgot how I got it, I either got it at a Toys R Us or Amazon in 2013. This is very know plush because it's the one a youtuber uses. The plush is very cool though and I like the way it looks and I'm happy to own it.

These are plushes of Shadow and Tails made by Accessory Innovations. I got them on my trip to Miami in 2015 at a Party City. The Tails plush looks very simliar to the plush made by Jazwares and Shadow is just a standard Shadow plush. The plushes have a keychain and a mini pocket to store DS games or something. I do have a Knuckles but I'll show it when I find it. Other than that these plushes are fine and something I'd never store my DS games in.

Here's the next two but before I start I want to tell the story on how I got them. once in 2017 I searched Sonic plush on Amazon and saw the Tomy 25th Anniversary Sonic plush and also Tails below it. I purchased them for either 20 each or 10 pounds each (I forgot) and about a week later those plushes arrived and I guess I never asked for a refund since I was young. These plushes are make by Impact Innovations/International I don't know what year they were released in but there is a knuckles in the set. These plushes are pretty high quality and cool and are obviously are based of Sonic Generations unlike the PMS Sonic. I think there's a smaller versions aswell. Nothing really else to say so...

Next is my first Sanei plush. The company Sanei Boeki has been making Nintendo plushes since 2002 and makes the most quality Mario plushes out there and I definately need to get more plushes from Sanei. I got this White Yoshi at a GameStop so it's the localized version by Little Buddy. It's a very high quality plush and that's all I really need to say about it.

This is the Tomy Sonic Plush from 1992 (with suction cups) I got this on December 14th 2019 at a retro game shop called The Retro Hunters along with other gaming stuff including a boxed Gameboy Advance! there was a also a section with plushes and they had a PMS Peach and Gosh! Tails but glaced over them and saw them in the recording I did. When I was getting ready to checkout the owner ask me if I was a Sonic fan and showed me two Sonic plushes both being a Tomy 1992 Sonic plush one with suction cups and a tag and one didn't so I got the one with the tag for 10 pounds. So far this is the oldest plush in my collection, and I love it it's made of a very fuzzy material, it's soft and cool. One weird thing about it is that the plush has three back spikes but other than that it's a awesome plush!

This is a Mario plush made by Gosh! (also known as Gosh International and now Gosh! Designs) in 2007 and wow it looks great! this is one of the most high quality Mario plushes I've seen! The embriodery looks great, his hat is made so well and has a very nice material, it's very soft and has cardboard in his feet so he can stand. His tag is just like the Kellytoy and Play by Play tag. This plush is so cool if you can get it! because PMS and Gosh! are basically the same company, these were also released in Amusement Parks only in the U.K so if you want one check Ebay UK for it. 10/10 Plush would reccomend!

This is a PMS Fire Mario Plush which is basically the same as the Gosh 2007 Mario but as fire mario and there's nothing else to say about it other than I got it off Ebay.

Here's a PMS Mario. This plush shows how PMS does their plush while bigger ones are higher quality and smaller ones are lower quality. to list of the diffences: Iron on eyes and mustache, mitten hands, no overalls etc. other than that. It's a mini Mario plush and nothing else.

Next is a Gosh 2007 Mario plush this a earlier version of the 2007 Mario plush which in terms of his face he looks exactly like the Mario Party 5 Mario from sanei (which isn't the first time Gosh! copied Sanei patterns) on mine half of the tush tag is cut off and one of the straps have came off. other than that it's a smaller and cheaper MP5 Mario.

This is a Gosh 2009 Sonic X plush which I got from the seller where I got Gosh 2007 early Mario. This plush is based off the Play By Play Sonic X Plush Which is based off the SegaPrize Sonic X Plush meaning compared to the first two they're very downgraded in terms of quality. His arms are overstuffed and his shoes are made of vinyl which cracks overtime. but except for those issues it's fine.

Here's a Gosh 2006 Mario Plush and I love how accurate this is to the Mario Party 5 Plush. it's pretty much the same so yeah. There's not much else to say but I still love this plush.

I got this Goldie Toad in a lot on Ebay with the next two plushes but although It was a fine plush I ended up selling it since I really brought the lot for one plush but it's still a okay plush.

Just like the Toad plush, it's a Goldie Yoshi that I got in the same lot. I'm actually selling this plush right now so if you want it. there you go. just like Toad it's a pretty average plush.

Here's a Gosh 2006 Yoshi plush and wow! it looks great! It's pattern is obviosly based of the MP5 Yoshi but it looks basically the same just made of a different material other than that it's awesome. I want to compare the the plush to the MP5 Plush let's hope that happens soon.

This is a Impact International Mario Plush which weirdly looks familiar to the Gosh 2007 Plush. Just like the plush, he has embroidered eyes,no stuffing in his hat and doesn't have actual overalls. Mine only came with one of his tags unfortunately even though in the listings pictures it did. Overall the plush is weird but nice.

Just like the Gosh Yoshi (and the rest of Gosh 2006 set) It's basically the pattern from the Mario Party 5 Plush Set. I Still like the plush though. For one, mine is way bigger sitting at 10 inches. The material feels very soft and the embroiderey looks great. His jacket can't come off since it's stitched to the plush and overall the plush is amazing!

Here's a Gosh 2006 Luigi and this is the only one in the set to not look like the MP5 Counterpart. Maybe it's because of quality control because other luigi's I've seen look more close to the Mario because this and all the other luigi plushes out there are basically recolored Mario's and because of that, there's not much to say. Mine's legs are almost in a sitting position but not completely so it can't really stand up properly. Over than that it's a pretty funny plush due to how silly it looks.

Here's the Gosh Donkey Kong Plush which I actually like more than the Sanei DK. I like how (on most of them) they made DK look angry because it shows more expression on the plush unlike the Sanei DK that's just kind of Idle. I don't usually care on the expressions of plushes but I just wanted to point it out. Other than that, it's a very good plush.